Hoathly Hill is on the border of East and West Sussex, set in the beautiful High Weald, between the two villages of West Hoathly and Sharpthorne.

There are 27 living units and about 25 acres of land, with vegetable, fruit and herb gardens, a square lawn with formal beds, a playing field, allotments and community buildings used for a kindergarten, sculpture and pottery and community events. Hoathly Hill is a peaceful, natural, social and beautiful place.

Hoathly Hill was bought over 40 years ago by a group of people with a vision for community living supportive of individual needs and initiatives. Many were committed to the philosophy of Rudolf Steiner, an Austrian thinker who founded Steiner Waldorf schools, biodynamic agriculture, anthroposophical medicine and much more.

There are currently about 70 people of all ages living at Hoathly Hill. There are weekly meetings, monthly work days, Saturday cafes and a celebration of the festivals of the year. The main house, the outbuildings and the land were bought at auction  in the 1970s and there was a joint mortgage until the 80s, when a ‘restructuring’ took place and most of the living units were sold as leases to individual leaseholders.

Hoathly Hill Association operates a ‘mandate system’: one person or a group of people are given the mandate to look after a certain area, such as development, finances, the soft landscape, the hard landscape, car parks or meetings.

Read an article from 2001 in The Telegraph about Hoathly Hill

Read an article about the biomass boiler

A short history of Hoathly Hill

by Christian Thal-Jantzen, one of the original founders 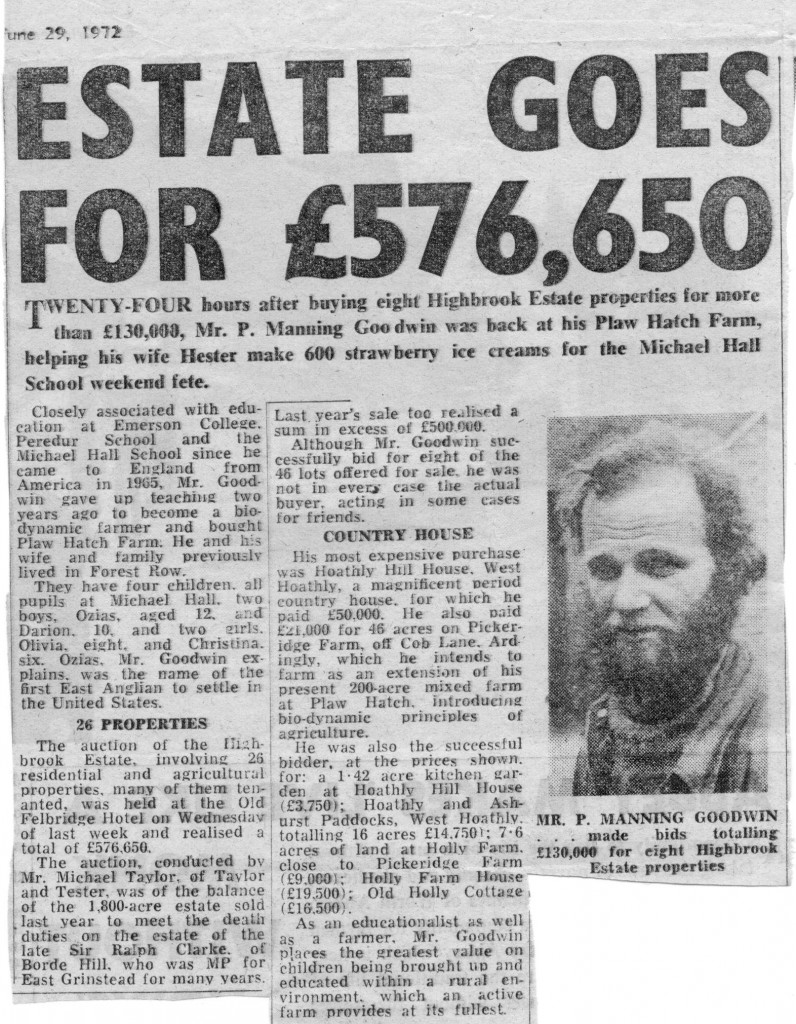 Originally we thought to simply divide into 5 separate parcels. The idea of creating a Community based on Steiner’s Anthroposophy lived strongly with the Nunerlys and Thal-Jantzens. Occupation took place in late August 1972. By Christmas Community was the agreed way forward. By the beginning of 1973, David, Mary-Anne and Sarah-Lee had left for personal reasons. During this same period the original auction group were joined by: Christopher Budd (later Houghton-Budd), Melissa Stone (later Budd & then Harwood), Basil Walker (non-resident), Olive Whitcher, Margaret Shelan, Brigitte Marking, John Marking. These 17 individuals laid the foundations for the Hoathly Hill Community.

All expenses shared such as fuel, electricity, council tax, building upkeep and a joint £250,000 mortgage from Mid Sussex District Council (MSDC). All households contributed according to their ability to pay, all accommodation was allocated on a basis of need. Both the decision of ability to pay and of housing requirements was decided by the member not by the Community.

Hoathly Hill Housing Association Ltd was set up to own the three acres on which all housing was situated. The Association had a mutual structure, i.e. all members were residents and all residents were members. There was a Management Committee and various sub-committees dealing with such matters as upkeep of fabric, soft landscape, maintenance etc. A separate company named Hoathly Hill Trustees Ltd was set up to own the non-housing land, particularly the fields and the vegetable garden, including the Barn. This had a board of Directors which was the same as the Management Committee of the Housing Association. The Community experienced recurring financial crisis during this time. The good periods were when we were growing and building, because the shortfall of adequate income did not show up in the cash flow. One of the causes of this problem could be traced to the £250,000 mortgage interest, which was at least 2% above individual domestic mortgage rate. Once a group get together to act collectively, it is viewed by the banks as “commercial” and charged at higher rate of interest. The other cause was a tendency for members to loose orientation as to cost of housing outside Hoathly Hill.

Obtaining consent to establish and develop the Community was a major achievement of the first 2 years. It involved a variation to the County Structure Plan and was on the condition that the hoses we created were only occupied by members of the community, their family, staff and students attending courses or doing research at Hoathly Hill.

Community meetings moved to Mondays on a weekly basis and continued to take place in private homes until 1984, when the Sculpture Studio was completed and the smaller studio was used for Community Meetings, Anthroposophical Group Meetings and the like for 2 or 3 years.

Change in tenure and financial arrangements

Households each took responsibility to pay their own costs of electricity and heating and to pay a rent, which was calculated as a direct proportion to the floor area occupied; the total costs were divided by the total floor area occupied. There were members who could not afford this rent which was in-part solved by short term borrowing from Hoathly Hill Trustees Ltd and by increasing loan from MSDC. The Community grew to 18 households.

The Land and Capital Exchange was founded at the beginning of this phase, which lasted 7 years. It was an attempt to create a wider community of enterprise, including both economic and cultural inspired by “Der Kammenden Tag” which had been based in Stuttgart in the early 20s with Rudolf Steiner as President. The idea was that economic enterprises would generate profits to support cultural life enterprises. The enterprises included Old Plaw Hatch Farm, Johannus Enterprises, Pixton Builders, Johannus Farm and Gardens, Carbonec Land, Carbonec Property, Johannus Trading Company, Johannus UK, New Economy, Johannus Academy of Sociology and Economics, Johannus Academy Trust (later Cultural Freedom Trust), Parsifal Ltd (renamed Hoathly Hill Trust Ltd) and Carbonec Housing Association (renamed Hoathly Hill Housing Association).

In order for the Hoathly Hill Community to survive the collapse of the Land and Capital Exchange project, it was decided to completely refinance by setting up a new leasehold management company (Hoathly Hill Association) to own the freehold of all houses and adjoining land at Hoathly Hill (that is all 22.5 acres). This Association then sold long leases at full market value. This enabled, amongst other things, domestic mortgages to be obtained by individuals at the much lower cost than our old joint mortgage.

The Formal Founding of the Community

In order to be able to refer to membership of the community we need a formally constituted organisation with a constitution. The new constitution was approved on 24th November 1986.

The Element of Brotherhood

At the early part of this phase a further 9 new households were created. The St Johns Centre for the care of vulnerable adults was established on an experimental basis and lasted for about two years. It could not continue due to lack of fee paying clients or other funds to subsidies them.

During Phase II there had been a thriving market garden at Hoathly Hill. Now some of the members got together and started to cultivate a limited area with individual plots and continuing waste management and composting in the West Paddock.

As part of the restructuring in 1986, Ashurst Field, West Paddock, Sculpture Studio, Herb Garden and site for a multi-purpose hall was acquired by the Cultural Freedom Trust, a registered educational charity. This was a compromise resulting from the Community members being unwilling or unable to raise the necessary funds to enable the new Association to own this property as it owns the Amenity areas including the Barn. The funds to enable the Trust to purchase were made available by a substantial gift without which the restructuring could not take place. 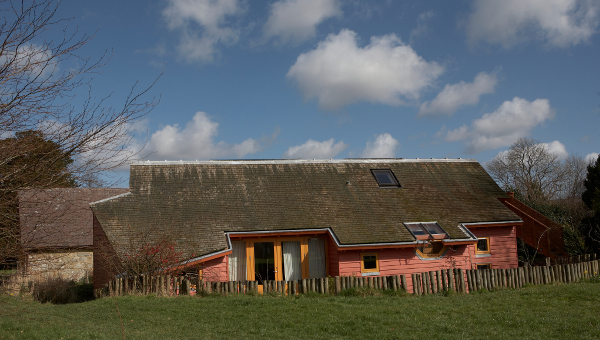 Do you have an event?

Are you looking for a beautiful venue for your event or course?

The Arc Hall is a available to hire for short classes, weekend workshops and parties. Please contact us for further information.